So I am in 3 bees. Two are virtual bees and the third bee is with my friends here locally in the Kansas City Modern Quilt Guild.

I gotta be frank with you about my experiences with bees and swaps...

I'm pretty shocked at the number of people who flake out on things they commit to. Seriously. My friend, Linda and I had the month of November. In her group, she only received six blocks back instead of 11. Several of us have stepped in and been angels to make blocks for her, since it's SEVEN months later and the bee is wrapping up.

It took until last month for me to get enough blocks back to make my quilt and several people made angel blocks for me, as well.

In my other online bee, (I'm sure I've blogged about this before) two people committed to the bee and then kept the fabric that I sent & didn't make my blocks. After much pestering, one of the people who flaked out made some excuses and promised she would send back my fabric, but she didn't. I never heard a peep from the other person.

In more than one of these instances, the "offenders" were actively blogging and posting photos on Flickr the whole time. They were still signing up for other swaps I was in. Still over-committing.

I realize that life is more important than sewing. I totally get that. However, when you say you're going to do something, I think you need to either do it (and do it well) or communicate with the people involved about the situation.

My bee with my local KCMQG friends has been great. We see each other monthly and exchange blocks/kits. Because there's a regular face-to-face meeting each month, it makes us all more accountable. I'm not saying that we're always on time, but we do pretty well.

All in all, I'm soured on online swaps and bees. I'm involved in a bento block swap and a mini bow tie swap right now, but I'll likely stop swapping for a while after these.

I'd like to focus more on sewing for myself (finishing some UFOs!) and for my Etsy shop (so I can get my featherweight!)...

What are your experiences with bees and swaps? Mostly good? Some bad? Do tell...

Being in both of the bees where things have fallen through, I feel your pain. I'm weaning myself from bees as well, at least long term ones. The thing that bugs me, Nikki, is that if you can't follow through, just let us know. We all get that things happen. But it's when people silently drop out, and you don't realize it until months later, things fall apart. It's pretty easy to get replacements for bees. Heck, I've had some great gals join Bee Vintage, knowing up front that they might not get a month, and they were cool with that (in the end, they did get their turn.) Not returning fabric is unforgiveable. To me, that's stealing.
So, my friend, I'm with you on this one.

I'm with both of you ladies. As much fun as our current bee has been for me, I am going to opt out of re-joining simply because I don't think I'll be able to make the deadlines for the next round (and I don't want to be one of those people who is overcommiting to stuff, etc). There are other projects that I want to focus my time and energy on for the time being, and to be honest, the fact that my month was April and I'm still waiting on 4 blocks is a tad disheartening. I was hoping to be done with this quilt by now.

Despite that I'm thankful for those that did make blocks for me. I wouldn't say I'm sour on bees forever, but it would be nice to know that those participating are being realistic about their other commitments and can do what they say they will. Hard to screen for that on Flickr, I guess . . . especially when some are still active on blogs and Flickr, etc and seem to maybe have the time. I'm sorry your experiences have been so frustrating.

Also - - sorry for the multiple comment streams deleted . . . I had some horrible typos that I couldn't live with . . . even in comment form. :P

I've been really lucky in my virtual bees and have not experienced anyone dropping out without notice or keeping fabric I had sent. I don't understand why people would do that to others. I have had people drop out, but they've always had replacements ready to go. It's been really great.
And while I totally get the over-committing thing, there is still always a way to get it done (or at least return the fabric). I'm sorry you had to experience that! I hope I never do. I have consciously not signed up for any bees this summer though. Summer seems to be the time to flake, as opposed to winter when you're indoors more.

I agree with you. Anymore the dropouts almost seem normal. I too will be droping out of the bees soon. I have been tardy once or twice but always communicate my issue and my finish date to my bee MaMa. I just think I will be better served to stick to my own projects!

i have loved bee vintage! i am so happy to have met all of you! i have been late a few times, sorry. when i joined, i wasn't concerned with getting something back - just wanted a kick in the pants to make something with my vintage sheet collection.

and it worked! i tried new stuff, learned some things, and made some friends! so i guess my view is that i am just happy for what i have gotten from the bee!

this bee is different though - i'm not sending out my designer fabrics, you know? i'd be pretty upset if someone kept my stuff.

I'm in the Lovely Linen Bee!

I'm in the KC Scrappy Bee 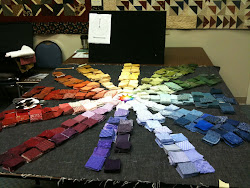 www.flickr.com
This is a Flickr badge showing public photos and videos from nkiblueeyes. Make your own badge here.